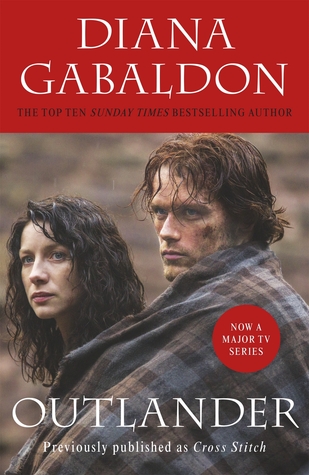 “Now,” he said pleasantly, “you are going to tell me everything you know about the Duke of Sandringham.” The blade pressed a little harder, making a dent in the fabric of my gown. “Take as long as you like about it, my dear. I am in no hurry whatsoever.” There was a small pop! as the point punctured the fabric. I felt it, cold as fear, a tiny spot directly over my heart.

Randall slowly drew the knife in a semicircle under one breast. The serge came free and fell away with a flutter of white chemise, and my breast sprang out. Randall seemed to have been holding his breath; he exhaled slowly now, his eyes fixed on mine.

Another book for my BookRiot Read Harder Challenge – this one fulfills my requirement for a romance book. I’ve had this book for months, after a friend very kindly (and quite surprisingly) gave it to me as a gift, saying “Trust me, it’s good.”

I’ll admit I had my doubts… but I’ll also admit my apprehension was misplaced. It was a well written story with interesting and sympathetic characters. I found the ending slightly too neat, and found some of the ‘relationship-stuff’ overlong, but overall it was a very entertaining read.

Heads up to sensitive readers – this book contains various things that may trigger or offend.

I will definitely read book two. I may even check out the TV series.

1945, just after the war. Claire Randall, ex army nurse, is on her second honeymoon in Scotland with her husband Frank (historian), after the war has kept them separate for a few years.  They are reconnecting as a couple, and whilst still in love, they seem to be finding their way around. Rediscovering each other. It is against this setting that Clair walks through a mini-Stonehenge and is transported two hundred years into the past, arriving in 1743. Disoriented and confused, Claire finds herself being almost immediately assaulted by Captain Johnathan Randall (an ancestor of her husband Frank’s and a horrible sadist) and kidnapped by a roving band of Scotsmen.

I mean rescued. Rescued by the Scotsmen.

Quickly making herself useful by tending their wounds, Claire (an Englishwoman) is taken in but never trusted by the Scots. She finds herself treading a thin political line between the English and the Scots, both whom think she could very well be a spy for the other. With little in the way of options, Claire tries to fit into 18th century Scottish life whilst looking for a way back to the stone circle and her old life. But she doesn’t count on falling for the young warrior Jamie Fraser, a wanted man, making her choose between her new relationship and dangerous new existence, and her faithful husband waiting for her in 1945.

Lets kick off by talking about the romance. I mentioned earlier that I postponed reading this book, avoiding it principally due to unfair expectations. Seriously, I kept avoiding reading this book, put off by the promise of something I assumed would be Mills & Boon-style heaving bosoms and turgid members, Twilight-style endless teen-angst-y yearning, or even 50 Shades-style descriptive S&M grotesqueness. But I was wrong. The romance here – the story detailing the start and growth of Claire and Jamie’s relationship as well as the various (and numerous) sex scenes were all done in a meaningful and adult style. It’s also not gratuitous – whilst it certainly doesn’t shy away from sex scenes, it isn’t over the top erotica either (not that there’s anything wrong with erotica). There was one scene that I am almost certain was about oral sex, but the details were light enough to make me uncertain. The focus was on the characters and their interaction, not on titillation. I found the romance to be solid and believable… if occasionally a little over written and over long.

If I’m honest, I think that some of my reluctance was due to the cover. I think I might have been more enthusiastic with one of the other covers. For example:

Yeah, I know. It’s silly, but it influenced me. What’s that – judging a book by its cover isn’t a good idea? Why didn’t someone tell me?

Moving past the romance and my issues with the cover, this book is simply a great tale. The period of time that Claire falls into is full of political drama, both within the small Scottish town she spends most of her time in, and the broader political landscape of Scotland v England and the ‘Bonnie Prince Charlie’ uprising which forms a tense backdrop. Claire is sucked deep into the action of into the 18th century life as a medic, a wife, a suspected spy, and possible witch. There are moments of the faintly ridiculous, but hell, most fun books have these.

Now the warning… I actually didn’t think to mention it all until reading some of the very acidic reviews in Goodreads, including some that call this a ‘rape book’. Reflecting back, the story included attempted rape of the main character, an incident of male rape, and a pretty harsh incident of domestic violence. Whilst the threats and attempts are described in detail to heighten tension (see my book quote) in the main these actions occur ‘off camera’ and there is no attempt to glorify the violence. With the possible exception of the domestic violence (which I deal with), these incidents are dealt with some sensitively and genuine thought for consequences. The male rape for example, is related to us by the victim, who is physically and emotionally shattered. The sexual assaults are not excuses for male action, there is no ‘woman in the fridge‘ moment, it isn’t a backstory or origin point for anyone becoming a superhero. The sexual violence is treated as violence – physical and mental.

I may well be criticised for saying this – but a book that contains a rape in it is not automatically ‘rape culture’.

I found the domestic violence is more troubling. Without too many spoilers, Claire is beaten by Jamie (for reasons that he considered acceptable). Again, the inclusion of domestic violence doesn’t bother me here – it’s meant to be a realistic representation of 18th century Scotland – in this instance, realism is appropriate. What bothered me at the time is how quickly Claire changes her mind from this being an unforgivable crime to falling back in love with him. It seemed convenient and a bit trite.

My main criticism would be of the end of the story. To me, it seemed a bit unlikely in places, a bit forced in others. It just seemed to slip a bit at the final stage.

That said, I enjoyed my time in this book. Its written in an easy, conversational style, and the characters are relatable and sympathetic, and its a hell of a lot of fun.