“Look, George,” said Bob. “You’re all grown up now. We’re both spiders of the world. Your Uncle Bob, well… I have needs, like any other spider. It’s been a while since I’ve had some, if you know what I mean.”

George gritted his fangs. The leer on Bob’s lips reminded him of the funnel web. “Uh-hmm,” he said.

“I just need something to get me through.” Bob gestured to the screen.

“Get you through what?” George said.

“You know…. something to get me through.”

“You shouted me up here… you… you want pictures of female spiders who open their legs for anyone?” sputtered George. There was venom in his words. Being a spider, there always was, but it rarely made the air. 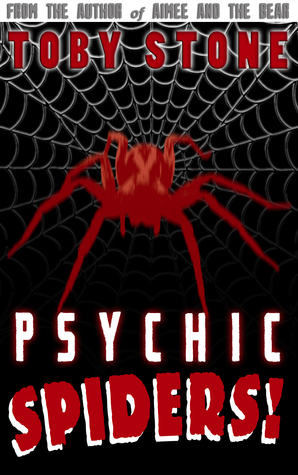 Yet another book that is exactly what it says on the box. It’s full of spiders.

And it is excellent.

Quick confession time – I got this book months ago (free), laughed at the cover (above), put it on the bookshelf and promptly forgot about it…

…italics to indicate the passage of time…

…until July came around, and I realised I really should have read it by now. So I knuckled down, read it, and found that yet again an indie publisher has come through with the goods. This is a great book; funny in much of it, sad in parts, a bit disturbing throughout, whilst still bringing a tense sense of action. There are moments that shine brilliantly, and others that shoot for the stars – and miss – but mostly it’s just really entertaining.

Psychic Spiders – 4 out of 5 stars

As I said, I got this book for free  answering an easy twitter promo question by the book’s publisher Hic Dragones.

@HicDragones @HutchingsJulie b. Little known fact – spiders are now being named after my pretty ponies http://t.co/doSLyJ3uGr

A few short weeks later and the book turns up in my post. Winning!

In brief, this is a story about George the spider. George, like most house spiders, enjoys watching the humans being mean to each other on TV, loves to drink coffee (especially day old coffee), and tries to survive with his family and friends in a hostile human environment. George, unlike most house spiders however, is a mutant. A seriously powerful mutant spider, with psychic abilities and the ability to dominate humankind to his will. After a human causes the loss of a spider close to him, George decides that something needs to be done, and that he’s just the mutant psychic spider to do it. Braving the wide world outside his house, George has to face troubled humans, other psychic spiders, and a vast global spider conspiracy known as The Web…

George’s aim? To get on TV.

I wondered how to describe this book. Charlotte’s Web meets the X-men perhaps? The spiders are certainly as intelligent as clever Charlotte. George is certainly the Professor X of the spider world. But describing it so simply doesn’t actually reflect the depth and quality of this book. This is a nuanced novel which asks some interesting questions about how we treat other creatures and how we treat each other.

For a book where almost all the important characters are spiders (which I personally find as creepy AF), Stone has done an amazing job injecting them with a sympathetic humanity and humour. George and his family have identifiable drives and goals; they want food and saftey, they want to enjoy life (they like music by the Beatles and spider porn), they want to be left alone. And its the spider’s very human outlook and desires that is the core of George’s adventure – he wants humans to stop killing spiders, and to do that, he needs to make sure that everyone knows that spiders and humans are not so different.

A noble cause indeed, but I warn you in advance that George is no gentle Charlotte spinning cute messages above a pig sty. George is mad, incredibly powerful, and will not be denied his time in the spotlight. George is more of an antihero, and there are some dark moments of George callously exercising his powers against humans and other spiders.

I thought the book had excellent pacing, almost a Terry Pratchett feel to how it escalates from humour to menace. It starts light and funny, but rapidly gets darker, tenser as we move to the book’s final act. Indeed, whilst Psychic Spiders kicks-off lightly, I would argue that darker themes dominate this book – it isn’t a horror novel exactly but it plays in some unpleasant areas. A stand out is the complex exploration of domestic violence, primarily through the eyes of the abuser.

Using the abuser’s POV is interesting in that this character is shown almost sympathetically, the man is regretful, shamed, he knows what he is doing is wrong. That said, the book at no time attempts to forgive this abuse – the consequences are clear, the damage done to his wife is awful, and the way his daughter gradually loses her love for him is tragic. Much like writing through the eyes of the spiders, writing from the perspective of the abusive husband seems to want to humanise the monster without excusing it. I thought the spiders were an interesting counterpoint to this subtle theme of men’s violence against women, as in the spider kingdom, women are the larger, more powerful gender. They are the more likely abusers, the ‘Enemy’ as it were.

The book isn’t perfect of course. There are a few interesting subplots that just seem to run out of steam, or go nowhere, or just not end in a satisfying manner. There were also a few loose moments that whilst cool seemed a bit unnecessary. Also whilst I loved the actual end, I thought the book hung around just a little too long afterwards – the author could have wrapped it up a little tighter for me.

All said and done – this was a fun and entertaining read, and I recommend it.

Hot tip for other reviewers – DO NOT put creepy spider gifs in your review whilst you are still typing said review. Having those repeating gifs crawling over my screen for the last hour or so is going to give me nightmares…