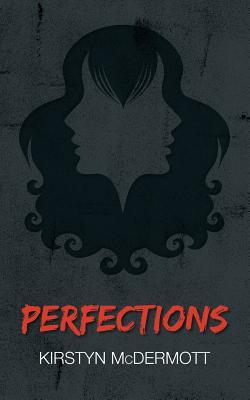 What would her mother think now, if she knew of all the times her eldest daughter had ignored that advice? Those hurried, hopeful encounters in her teens. The desperate calculation of her early twenties. Until she could no longer convince herself that Dr Chiang may have been wrong. Until, finally, she forced herself to give it up. To pack it away. The desire, the longing, the need which she felt for near her entire life. Curled within her heart. Within her broken, bloodless womb. Only rarely, now, does she hear them. The ghosts of those children she can never conceive.

Busy, busy, busy…and barely blogging :(. I’ve been trying to finalise this review for a week now!

A great dark urban-fantasy story; satisfyingly true to its Australian setting. Kirstyn writes some great dialogue, and has a deceptively smooth writing style; she makes the reader comfortable before expertly ratcheting up the tension. Some excellent twists and dark events, although I got the feeling that she pulled a few punches. It’s enjoyably creepy – a fine lighter horror read. Recommended.

Perfections: 4 out of 5 stars

Two sisters with very different personalities; Jacqueline – protective, efficient, and driven, Antoinette – emotional, thoughtful and perhaps a bit fragile. Despite these differences they are committed to each other, supporting each other through a sisterly bond forged in the face of a difficult and domineering mother. While Jacqueline is interstate on business, Antoinette is at her house nursing the fresh wound of an ugly break-up . In a moment of drunken heart-ache, Antoinette accidentally accesses a dark familial magic, creating her hearts desire but at a great and terrible price. Stemming from this single act the sisters find themselves exposing old secrets and encountering new evils that threaten everything they thought they knew about each other.

This is a tough review to write as I particularly enjoyed the various ‘reveals’ and twists that the author included in this story. I really had no idea what to expect going into this book, and I think that anything remotely approaching a spoiler would be doing future readers a disservice.

What I can say is that the writing is slick, well-paced, excellent. It’s easy to read yet still maintains a strong sense of building eeriness and wrongness.  I called this a ‘lighter-horror’ novel earlier, and by this I mean it isn’t blood and body count from beginning-to-end; rather it is more atmospheric and moody as the sisters work their way through the secrets and betrayals. A character driven tale in a more dark-fantasy vein.

And the characters are where this book really shines. Alternating between the two sister’s point of views gives us plenty of time to get attached to both of them, and the importance of their relationship to each other is a major plot driver. Neither sister felt underdeveloped, and even the supporting characters were fleshed out and real.

Kirstyn nails the locations and themes. I was impressed how she captured the essence of different Australian locations without making it a caricature. You could feel the oppressive humid heat of Brisbane, the lush overgrown sense of the Dandenongs. As for themes, the obvious ‘ power from sisterhood’ is clearly dominant. The two main characters support, protect, and put themselves at risk for each other throughout the novel, drawing on the strength of their sisterly bond. There’s a nod to motherhood as a theme here, the desire to be a parent, and a recognition of the difficulties and emotions that occur when that desire cannot be fulfilled, or alternatively where motherhood is undesired. These were powerfully done without being blatant or overdone.

My one criticism would be that on certain occasions I felt the build up to a moment was bigger than the moment itself. Some of the biggest scenes were just a trifle underdone, almost as if the author had pulled back at the last moment. The ending was probably where I felt this the most; the whole book is leading to this moment and because of a perspective choice…it just misses the impact it should have. Or perhaps, the impact I hoped it would have.

I don’t want to overplay this one criticism though, this was a really enjoyable read.

After reading and enjoying The Female Factory, I signed up to receive the Twelfth Planet Press / FableCroft Newsletter  where I saw a call out for advance reviewers. Twelfth Planet is an Australian speculative fiction indie publisher, and is focused on providing opportunities for women authors. As this fits in with my challenge to read more Australian Women Authors to this year, I asked to be included. Here’s looking forward to more reviews from Twelfth Planet going forward!

Obviously this review fits into my Australian Women Writers Challenge – Check out their website for other reviews! The searchable database (here) looks like a great resource.